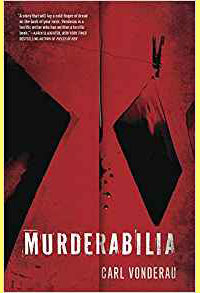 With his diverse background, people might wonder how Carl became the mystery thriller writer of Murderabilia. (Yes, “murderabilia” is a real term.) Richard and Carl discuss this and his strong philanthropic interests as well as what it takes to write an novel and get it published.

Carl Vonderau is the author of Murderabilia, a thriller that takes place in the upper crust world of private banking. Like the protagonist William McNary, Carl has been a private banker and was raised in a Christian Science family. On the other hand, his father was never a serial killer whose photos launched the “murderabilia” market. Nor did Carl’s family use Christian Science to heal his childhood illnesses—well, not most of them, anyway. Actually, Carl grew up boringly normal with two caring parents and his sister in a suburb of Cleveland. Then he went off to college in California, and things started to get more interesting. He ended up studying economics at Stanford and music at San Jose State University before he embarked on a career in banking. His career enabled him to live and work in Latin America, Canada, and North Africa and to do business in Spanish, French, and Portuguese.

Carl’s love of books started in elementary school. Forbidden to watch TV after dinner, he had his head in a book almost every night. That led to ghost stories that scared the bejesus out of the other kids in his elementary school. Carl always loved to write but never had the time or money to do it full-time until recently. Carl says that fiction allows him to synthesize the seemingly contradictory parts of his life. Murderabilia combines private banking, serial murderers, and Christian Science.

Nonprofit work also inspires Carl. He is a partner at San Diego Social Venture Partners, an organization that mentors other nonprofits to reach the next level and strongly supports Traveling Stories which encourages reading, something he holds dear.