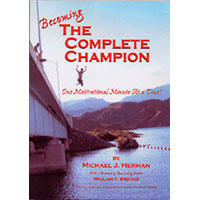 Since 1986, Michael J. Herman known as “Mr. Motivation” has been motivating and inspiring the world, first as a television sitcom writer-producer, but he has operated his company Third Eye Communications since 1986 with 13 years of growth to show for it. His unique style of leadership has been called “Extraordinary” by CEOs like Bob Crandle of American Airlines, and Jill Barad of Mattel Toys.

His leadership mastery stems back from his own motivational strategies developed when, as a five-year-old boy, Michael suffered a traumatic brain injury, resulting in paralysis, aphasia, and total blindness. Though it took more than 13 years, Michael’s obstacles seem minuscule when compared with the achievements he has amassed.

Michael has authored 14 books, penned and published more than 7,600 articles on more than 60 topics in more than 200 publications around the world. He has won more than 60 awards for writing/publishing and speaking, been identified by the Los Angeles Times as “The Next Big Thing!” and by USA TODAY as “Mr. Motivation.” Now Michael J. Herman, “Mr. Motivation” travels the world motivating, inspiring, and entertaining audiences on the topics of Motivation, Inspiration, Leadership, Positivity, and Success.