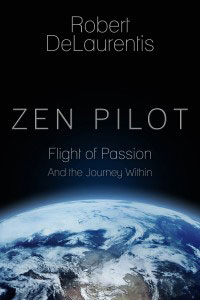 Robert DeLaurentis has circumnavigated the globe in a single-engine piston plane and is planning to follow up that achievement by circumnavigating the globe over the poles starting on January 12th.

Robert DeLaurentis, the “Zen Pilot,” is a noted speaker and author with a successful apartment rental real estate business and over 1,200 flight hours as a private pilot. Robert has his Visual, Instrument and Multi-engine Ratings and holds a Commercial Pilot Certificate and an advanced graduate degree in Spiritual Psychology. Often in the air more than on the ground, Robert lives and breathes the adventure of flying while spreading the message of fun and safety. Just as importantly in Robert’s story, is the successful business he created that allows him to do live this lifestyle. His book, Flying Thru Life, helps businesses and individuals go far beyond what they ever believed was possible.

Robert had an impossibly big dream: to circumnavigate the globe in a single-engine piston plane. His journey would take him to the ends of the earth and over some of the most inhospitable terrain on the planet. Having previously flown to far-off places, he thought he knew what to expect. But reality doesn’t always make for the best co-pilot.

“I was rocketing toward the ground in an aircraft loaded with high-octane fuel, and all I could do was negotiate where the impact would happen.”

In Zen Pilot Robert shares the insights he gained from overcoming paralyzing fear, defeating the obstacles, and confronting any situation with grace and ease.