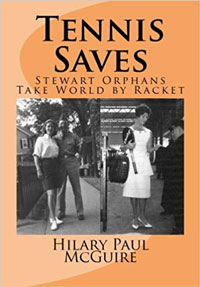 Richard welcomed two very interesting but divergent group of guest to his show.

In the first half of the show, Richard welcomes local Solana Beach residents Pat and Pam Stewart and Hilary Paul McGuire. Pat and Pam are two orphan sisters who became tennis players and achieved notoriety during the Open Era in the late 1960’s. Imagine two orphan girls trying to survive. Would you say to them, “Play tennis?”

Pat and her sister Pam have both competed at Forest Hills. During her 19 years of competition at Forest Hills and Wimbledon, Pat inaugurated the Open Era on Center Court versus Ann Haydon-Jones. So impressed were the British press with her beauty, that they named her Wimbledon Glamour Girl twice. Her modeling career led to marriage with England’s favorite cricketer John Edrich.

Meanwhile, Pam was not only competing occasionally but coaching personages from Ross Perot to Dinah Shore at famed clubs from New York to Miami. Pam’s weekend with the Kennedy family may enliven discussion of the anniversary of JFK’s death.

In his biography of Pam and Pat “Tennis Saves: Stewart Orphans Take World by Racket,” Hilary Paul McGuire documents the lives of two women who were literally saved through their involvement in tennis.

Michael Tedesco and Monica Feakes join Richard to discuss the third annual Coastchella concert to benefit Scripps Memorial Hospital Encinitas which will take place Thursday, Oct.11, at the Belly Up Tavern in Solana Beach. Chart-topping singer-songwriter and American Idol winner Phillip Phillips will be the featured performer. Our community advisory board dreamed up the idea last year, and it was such a success they are doing it again this year!

Coastchella will begin at the iconic music venue, 143 South Cedros Ave., with a 5 p.m. VIP reception. It will be followed by the main event from 6 p.m. to 10 p.m., including a cocktail reception, live auction and live performance by Phillips, who won the 11th season of “American Idol.” Phillips’ singles “Home” and “Gone, Gone, Gone” both reached the No. 1 spot on the Billboard charts.

Tickets to attend the event are $250 per person for general admission or $400 per person for VIP tickets. To register visit www.scripps.org/coastchella. For more information about the event, as well as sponsorship opportunities, please contact (760) 633-6523 or specialevents@scrippshealth.org. Visit us on Facebook at http://bit.ly/C18Facebook or #ScrippsCoastchella18

Proceeds from the event will help fund the build-out and enhancement of the intensive care unit in the new acute care building at Scripps Memorial Hospital Encinitas. North County’s population growth has created a need to expand patient care capabilities at the hospital.